The morning after the last United States presidential election, when I woke to a world of grief and ash, Claire sent me an audio track from Guide Gods, a track compiled from her performances, when she circles around the audience and asks each person present, “Tell me something you love.”

Maybe I’d always been a little bit in love with that question, with that invocation: the act of closing a performance about disability, religion, and the sacred with a concrete litany of the things that people cherish.  For me, religiosity has always been a practice of deepening love, of making it more vivid, more tangible, more present in my mind, in my heart, in this world.

But I don’t think I really grasped its significance until that November morning, when I listened over and over to the sound of other people’s loves, with fear and loss tangling in my gut while tears streamed down my skin.  Listening, I felt what it meant to be held in love.  Not love in the abstract.  Not love as an ideal.  Love in all its idiosyncratic, private particulars.  The sound and feel of strangers speaking aloud one thing they love knit together a soundscape, a cradle for my heartbreak.

“Tell Me Something You Love” isn’t just about the big loves.  Near the end of Guide Gods, when Claire turns to each of the tea cups and poses the question, we hear some of the people she interviewed name a thing they love.  Claire has curated their answers quite deliberately, careful not to pick only the sublime, the beautiful, the exquisite.  For every person who says something profound—“God and my mum”—another offers something brilliantly ordinary.  One man says, “Cheese and Onion Tayto crisps, on batch bread with real butter, plastic cheese and tomato sauce and a tin of coke.”  Now I’ll confess, I’ve never tasted Tayto crisps, and it’s been thirty years or more since I’ve had a can of coke.  But the precision of that love delights me, the specificity of that memory.  When I hear him speak of it, I love it a little bit too.

If there’s one way religion has gone wrong with love, I think it lies in an all-too-frequent tendency to privilege the transcendent, rather than the concrete: to champion love as a kind of supreme devotion, rather than an affirmation of the quotidian world in which we live.  There’s a powerful moment in Jonathan Rosen’s luminous book of essays, The Talmud and the Internet, where he recalls his American Jewish grandmother being wheeled away to surgery before she died.   When asked what she’s thinking about, she replies, “A pastrami sandwich.  With mustard.  On rye.”  It’s a memory Rosen savors, an affirmation of life, “an act of defiance in the face of eternity.”  I honor loves like that, loves that are bound up with the very fiber and flesh of this earth, loves that come alive in detail.

When I finally saw Guide Gods live, when I finally experienced “Tell Me What You Love” with a gathered community, I was struck by the way people responded to each other: the way the recitation of our loves became an invitation to connection.

Because Guide Gods is staged in the round, we are all aware of each other.  Eyes meet across the circle of the stage; bodies sit near each other in close proximity.  As we answer Claire’s question, we listen to each other.  We smile, maybe, or sometimes we laugh.  As Claire continues moving around the circle, the recording of our own voices begins to echo back.  Slowly, gradually, I see the audience realize that we are hearing our own recorded voices interspersed among the new words, that we are crafting, quite literally, a tapestry of love.

“Tell Me Something You Love” makes tangible a kind of sacredness that I often find in disability community, in crip space, among those of us whose bodies and minds are so often disregarded and despised.  We know something about the political significance of offering each other love, of doing the concrete, physical labor of sustaining and caring for each other and ourselves.

We claim love.  We claim the right to love.  Not simply to be the objects of someone else’s charitable impulse, not simply to be recipients of care, but to practice love, according to our own rhythms, in our own languages.  To claim our lives as sources of pleasure, as sites of satisfaction.  To ask questions of each other, to breathe into the unfolding answers.  Tell me something.  Tell me something that you love. 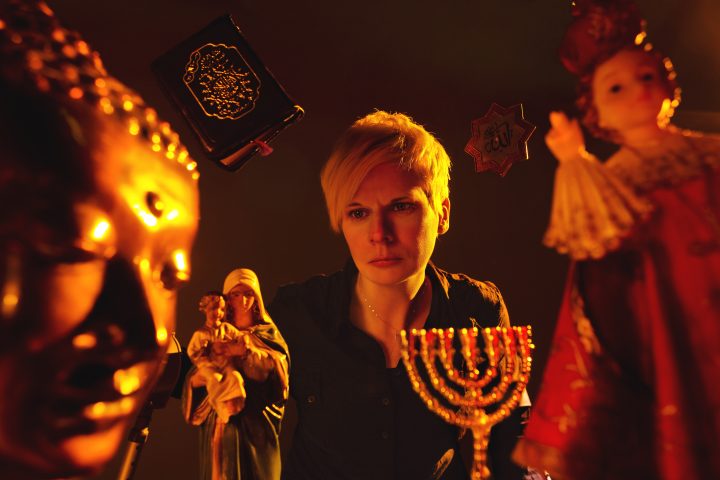