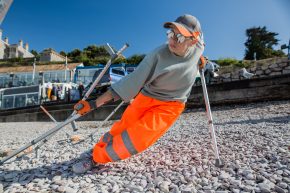 Claire has been honoured for her Outstanding Artistic Development in dance at the 2021 German Dance Awards.

The Jury said: “Claire Cunningham’s work is exemplary for the work of other pioneers towards a future featuring physical diversity in dance and society. This development, which urgently requires more support and appreciation in Germany, is further promoted by Claire Cunningham by virtue of her impressive stage presence, artistic consistency and humour.”

Claire says:  “I’d like to say a sincere thank you to the jury for this honour and recognition. For the award itself and for the incredible company it places me alongside – this year and previous winners.

I appreciate this acknowledgement of my career and work immensely and the recognition given here that artists such as myself, who have traditionally not been considered part of the dance canon, are offering valuable directions and potential to the development of dance, dance vocabulary and techniques. The support I have been offered by curators, programmers and audiences in Germany has been incredibly important to me.  I enjoy so much performing and working in Germany because  I find there to be such rich dialogue and engagement still around art, a desire to engage politically with the issues artists raise, and from venues to engage with artists themselves – not just a single show -and to craft relationships such as that which I have been fortunate to have with Tanzhaus NRW in Dusseldorf.

I want to take this moment also to acknowledge that while I am perceived as a solo artist – there is no such thing in performance- and my work is also the legacy of a whole constellation of collaborators, Crip artists, activists and allies – in particular my incredible Producer Nadja Dias.

It feels particularly special right now -in this time of being dark- to feel that my work, the memory of my work stays with people even when I am not performing and still takes effect.  In these difficult and traumatic times it reminds me that while art is perhaps not the most important thing in life, it is one of the things that make life worth living, it is one of the reasons we keep people alive  Thank you very much.”

Alongside Claire,  Heide-Marie Härtel, Artistic Director of the German Dance Institute Bremen, won the main award; Ballet and dance educator Ursula Borrmann was honoured for outstanding developments in dance; and  former dancer Adil Laraki was honoured as an outstanding performer.

The German Dance Award – the highest distinction in the field of dance in Germany – will be presented on Saturday, 23 October 2021, at the Aalto Theatre in Essen. Tickets to the live and streamed events will be available to public in due course.

Since 1983, the German Dance Award has honoured outstanding personalities on the German dance scene – regardless of whether they are contributing to dance on stage or behind the scenes, or in the fields of education, journalism, science or other areas related to dance. The award also honours performers, ensembles and projects in the dance sector for future-oriented initiatives, exemplary concepts or extraordinary productions.